Cocaine And Cock: Our Fabulous Guide To Gay Bogotá, Colombia! Bogotá is not for the faint of heart. You’ll find more white powder than Aspen in January, and some of the most macho rough trade your bottom can bear! At lease this has been what many people think of Bogota and the area around it but it has not only cleaned up but many boytoy.com members love their travel to Gay Colombia!

Despite what you may have heard in the news, Bogotá is not a dangerous, crime-ridden city. In fact, almost all of the crime is kept far away from the tourists by some of the most efficient cops in the world – all of whom are dressed up in very hot uniforms! The city is full of hot Latin men and sexy boytoys – and even many “straight” bars don’t allow women at all – so you don’t have to worry about competing with the local chicas when you are in search of a hot hermano!

The culture also works in favor of all you bear searching bottom boys! In Colombia, tops are not considered gay – and it’s socially acceptable for a “straight” guy to go to the gay clubs looking for ass to pound the night away.

Gay culture is also very accepted in Colombia – where a recent law requires at least one percent of the army to be composed of gay men, and the most popular local television character is a delightful drag queen. If only I spoke Spanish, I would have auditioned for the role!

Just be warned, Bogotá is one of the coldest tourist cities in South America – you’ll want to bring a jacket and leave your beachwear and cargo shorts at home. This is a jeans and sweaters type of city!

Your nasal passages will thank you! The first thing you’ll want to know about Bogotá is the drug scene – which would make Amsterdam look like a Mormon enclave!

Drug use in the clubs is rampant – because, under Colombian law, most drugs including cocaine are legal for personal use. You are allowed to have up to three grams on you at any given point in time, and dealers are practically everywhere.

Cocaine is cheaper here than anywhere in the world – pot actually costs more than white powder – so you’ll have no problem staying up all night.

On the other hand, “poppers” are illegal – don’t even try to bring them down with you, because they’ll get confiscated at Customs. Meth, while legal, isn’t very popular – mostly because the cocaine is cheaper and better than the twinkling tina! In other words – it’s the opposite of America!

You do have to be careful on your way back to America. When you fly from Bogotá to any American airport, you will be searched like you have never been searched before.

Do not bring any cocaine back to the United States with you. On your last day in the city, have your hotel wash every article of clothing you wore while doing coke in hot water.

The dogs at Miami airport can smell even small amounts of cocaine – and you will get strip-searched at gunpoint if the dogs smell any interest in you. U.S. Customs officers may be the one type of man in the world whose fingers I don’t want in my sweet little ass!

Cruising And Clubbing – Welcome To Chapinero

There are more than 100 gay bars, clubs, and saunas packed into this tiny, affluent neighborhood in the northern section of the city.

It is estimated that there are more than 200,000 men who identify themselves as gay who frequent Chapinero on a regular basis, and another 400,000 tops who identify as straight but hit the bars looking for ass regularly.

In other words, Bogotá is a little bit “top-heavy!” The bar and club scene starts fairly late and you won’t want to really cruise indoors until at least 10 PM or later. But, outdoor cruising is common and accepted.

The easiest place to cruise during the day is the Parque de la Independencia – walk around the extensive bike paths, and you’ll find lots of men trying to look you in the eye while strolling in the woods.

The best value is on the weekends when most bars hold regular “Sungay Afternoon” parties with cheap drinks to help you clear away your hangover and build up your courage to enter the dark rooms once again.

All around Chapinero are small hotels that will rent you a room for an hour or two for a few dollars – so you don’t have to bring a pick-up back to your regular hotel – unless you really want to!

For roughly five years, Bogotá has held its own annual gay pride event every July – as a weekend-long cruise fest that starts in the City Center and then winds its way to Chapinero. It is still new, so it is far from the biggest Gay Pride event in South America, but it has a fresh energy that is rare in tried-and-true Pride events.

There is less political activism in the event, which is very cruise heavy. As with most gay events in Bogotá, a lot of “straight” men will attend and compete for your affections!

I know that I had a “rough night” after my last Bogotá Pride Party!

The Museo Del Oro – the Museum of Gold – contains the largest collection of gold jewlery, statues and artifacts in the world. Surrounded by armed guards, you can spend at least a day – if not more – seeing literally billions of dollars of beautiful solid gold works of art.

The gold here is worth more than all of the ingots in Fort Knox! I almost expected to see Matt Damon, Brad Pitt and the others boys from Ocean’s 11 skulking about looking for a way to plan their next heist!

Don’t get cocky, however, as the exhibits are surrounded by fortified glass and there are scary police officials everywhere.

Most of the gold comes from Amazon, Incan, and Mayan cites that have been excavated over the past few centuries. It’s fascinating to see how the Indian goldsmithing skills evolved over the centuries – the older pieces are much more primitive than some of the dazzling delights from the more modern era.

The gift shop is full of inexpensive gold-plate replicas of many of the more beautiful pieces – so if you ever want to buy that special boytoy a nice necklace, you know where to go!

Who knows, they might make it worth your while, big boy! San Andresitos – Get Ready To Haggle!

If you like to shop ’til you drop and have fine-tuned your negotiating skills, San Andresitos may become your own personal heaven.

This giant open-air market sells everything and anything under the sun – from hand knit sweaters and leather goods to gold jewelry and even medicine! The most fun, however, is finding out how much things cost.

Nothing has a price tag on it – and the first price you are quoted is never what the real price of the item is.

Once the vendor quotes you the first price, you need to respond with about half of what he has originally quoted to you. He or she will then come back with another price.

Expect to settle with a final price of about 35 percent lower than what was originally quoted to you – although if you keep at it, you can probably get away with your original 50 percent discount.

If you want to get some exercise during the day and see absolutely fabulous views of the city, you’ll want to hike up to the top of Monserrate – the small mountain overlooking Bogotá. 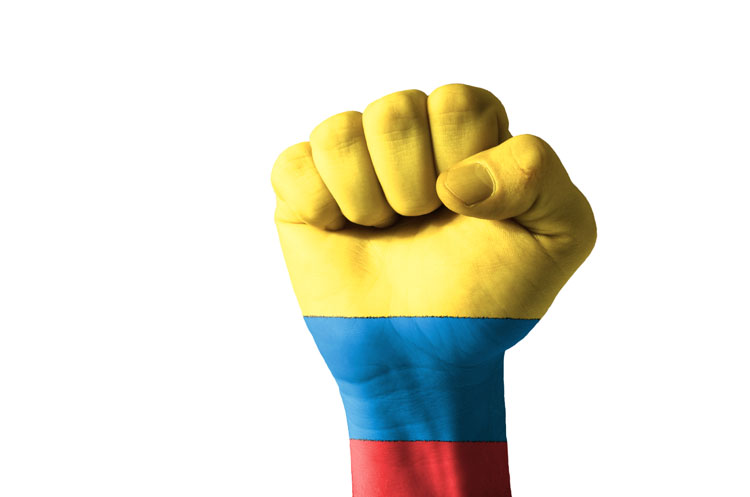 Moserrate offers spectacular views of the city, interesting hiking trails, and a 17th-century church dedicated to “Our Fallen Lord.”

If you are lazy – or were hitting the clubs all night long – you can also take a tramway or a funicular to the top. Either way, Monserrate will make you glad you climbed every mountain!

Come On Goldicocks – Get Down To The Gay Bogotá Boys Today!

Buenos Aires was too crowded. Rio was too hot. Bogotá was just right!

So don’t blow it – just get ready to go with the blow and dance the night away in one of South America’s sinsationally sexy cities and book your next vacation to Bogotá, Columbia. 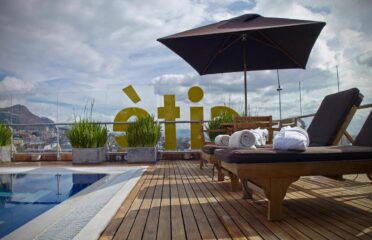