Once You Go Cape, You Won’t Want To Escape 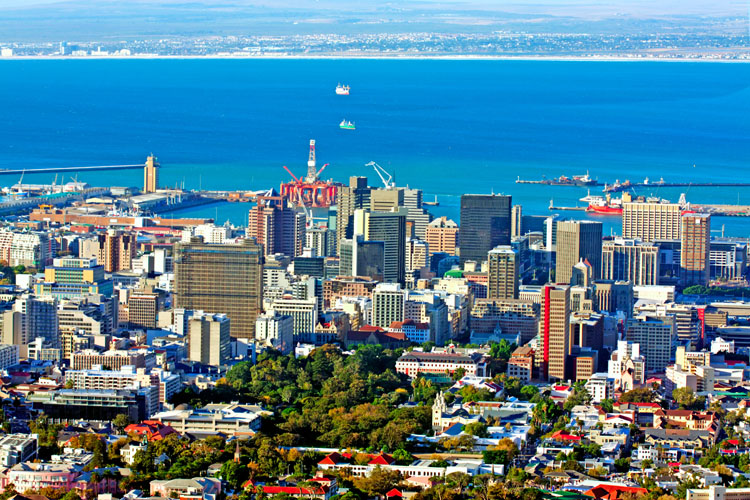 If so, let Gay Guides take you on a journey to Cape Town, South Africa – where the only things hotter than the bulges on the beach are the cocks in the clubs! 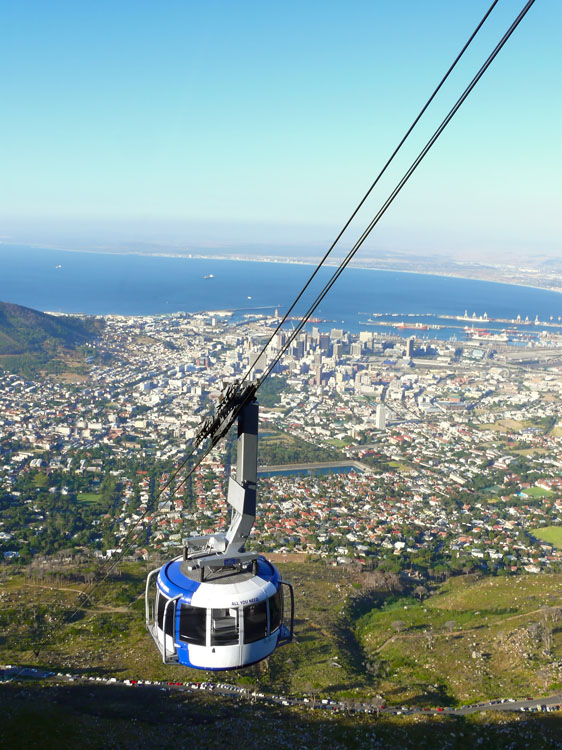 Cape Town is rated one of the top five gay destinations in the world – and is in the only country where gay rights are written into their constitution! You’ll find an extremely gay-friendly atmosphere – and plenty of choices whether you like white meat or dark.

Located near the southern tip of Africa, Cape Town offers a mild climate, exotic safaris, and a vacation that will exceed your expectations!

South Africa is one of the few First World nations where whites and Asians make up less than 20 percent of the total population, so it would not make a great trip for rednecks or rice queens. And most of the gay tourists in Cape Town come from England, Germany, and Holland – so even your tourist trysts may end up having a bit of an exotic appeal! 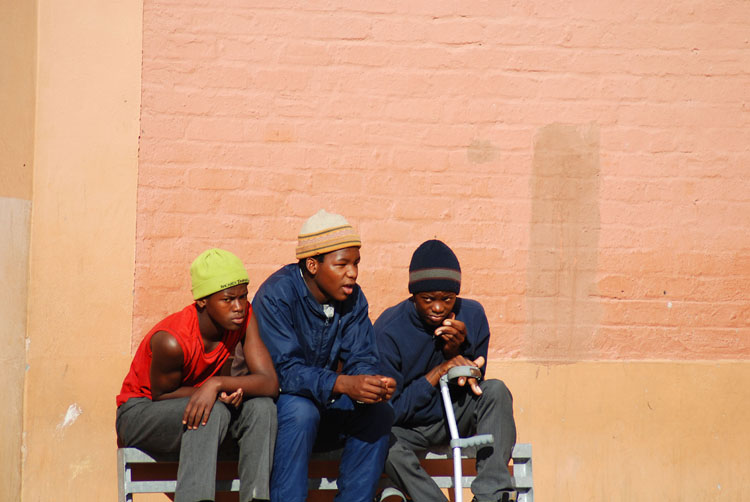 One important thing to remember is that nature reverses itself that far south of the Equator. This means that summer becomes winter, winter becomes summer, you go north to get warm and south for cooler weather. Even the toilets flush backward!

So while Cape Town is temperate all year long, if you want to go in their summer when it is peak beach season, you need to fly out when it is winter in America and Europe.

If you get the chance, try to find a hotel either near or inside De Waterkant – Cape Town’s official gay village. De Waterkant has the highest percentage of gay men of any town or district on the entire African continent. 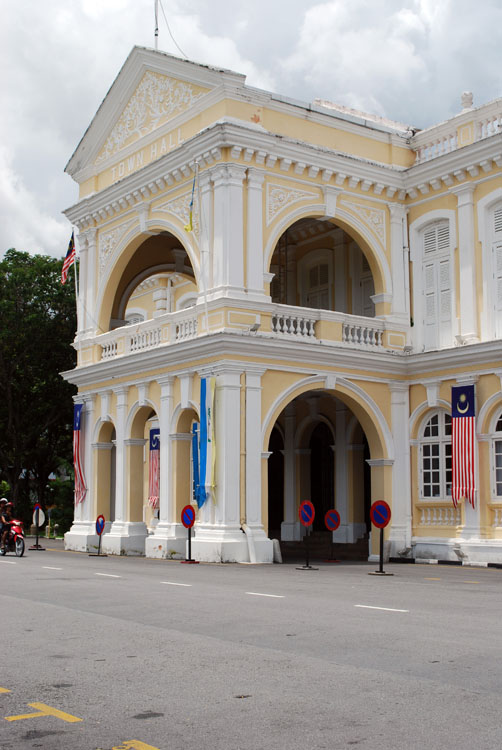 Oddly, there are almost no lesbian bars or organizations in De Waterkant – which is why some Cape Town residents refer to the area as “Where the boys are.”

Like many gay neighborhoods around the world, De Waterkant has an upscale bohemian feel to it during the day and becomes a seven-day a week gay party at night.

If you have a lot of money in your travel budget, you might want to book your stay at The Glenn – a four-star hotel exclusively for gay men, with no women or breeders allowed. It has its own nude swimming pools, saunas, and bars where you can meet men or boytoys who have mating on their minds. 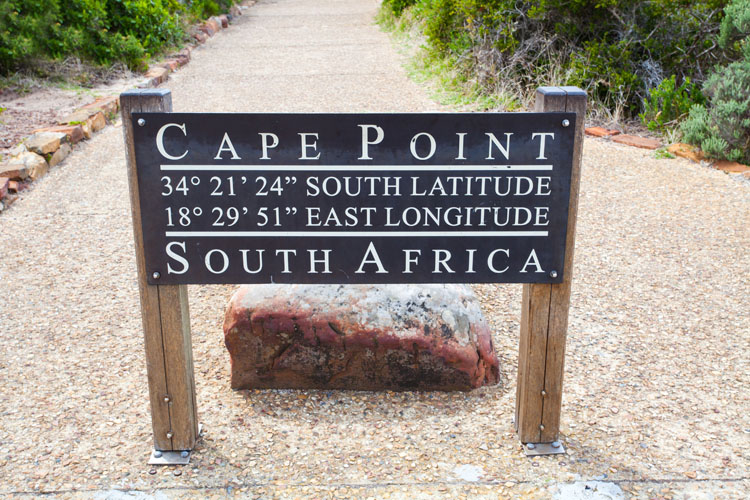 There are tons of gay bars and clubs open until the early morning hours – and almost all of them have back rooms or dark corners where nearly anything goes. You’ll also discover plenty of nice restaurants, gay saunas, and several sex stores.

If you want to get laid in the shade during the day, there are several good cruising areas in and around De Waterkant. The Victoria and Alfred Waterfront is a notorious gay pick up spot during the day – featuring many men who simply ride up and down the escalators until they spot their preferred bit of man meat!

At night, Lower Loop street becomes another favorite cruisealicious spot – and many men simply hang out on the corners near the clubs until they find someone to head into one of the nearby alleys with.

After you’ve spent all night sucking and fucking in De Waterkant, you’ll want to sleep off your tired boner on the beach. Luckily for you, Cape Town has two gay beaches for you to choose from.

The most popular gay beach is Beach #3 At Clifton Beach, just outside the city. It’s very trendy and tends to attract lots of smooth young muscle boys and the older men who love to love them.

Nearly everyone on the beach wears Speedos – except the very occasional straight boy who happens to wander by in his long baggy shorts. Just ignore him and he’ll go away. 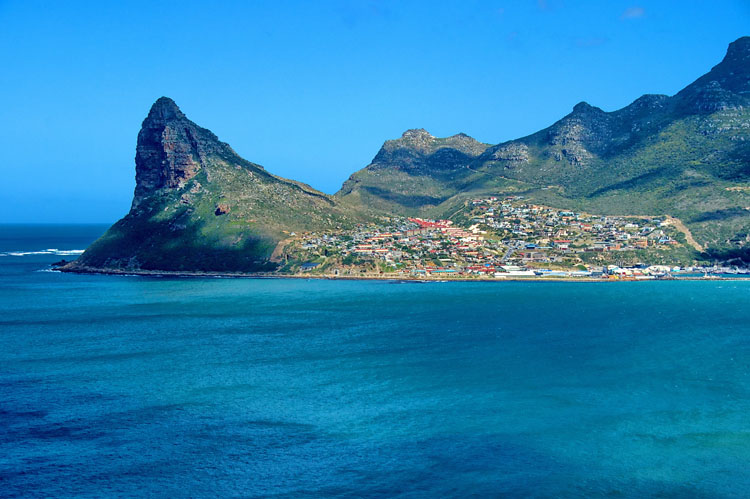 Because it’s right next door to Beach #4, which is straight, Clifton Beach doesn’t have much going on in the way of trysting – but it can be a great place to meet a new partner. Remember, you can always play with his penis later!

If you are looking to take a walk on the wild side, you’ll want to check out Sandy Bay, Cape Town’s all nude gay beach. Things get much raunchier here – because the beach is both isolated and mostly free of straight men and families.

It usually isn’t too hard to find a man to take into the dunes for a little bit of private time – and work off your hangover with a little bit of sweaty sex in the sand.

The guys in general are not as good looking on Sandy Bay – but the amount of available cock more than makes up for it, in my estimation!

The most fantastic party in all of Africa is Cape Town’s annual Mother City Queer Project. Held the second Saturday of December, this event is a city-wide all drag costume party.

You’ll see boys who look like girls, girls who look like boys, and everything in between! Each year the Mother City Queer Project has a different theme – those in the past have included “The Twinkly Sea,” “The Locker Room” and “Safari Camp.”

The party starts in the afternoon and goes on well into the early morning hours. Even many of the straight bars in town hold drag shows during the Mother City Queer Project – which is absolutely beyond dragalicious.

There are prizes for the best costumes, lip-sync parties, cabarets, street vendors selling boas, and pretty much everything and anything dragulous you can imagine.

It’s many guy’s favorite parties of the year!

The Cape Of Good Hope in Gay Cape Town

Located just outside of Cape Town City, the Cape of Good Hope is the most historically important landmark in the Southern Hemisphere. 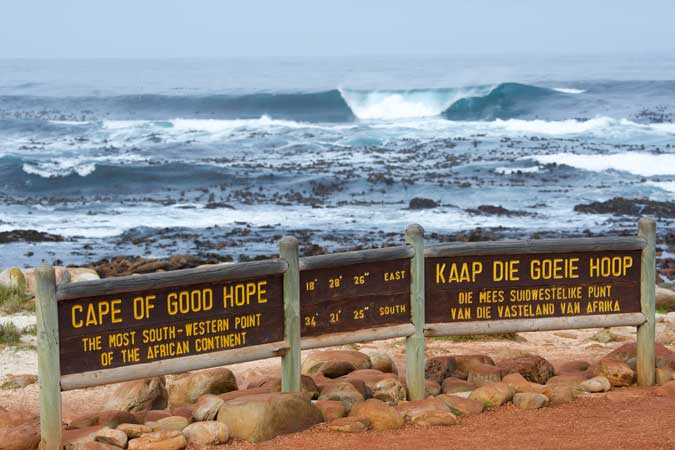 Navigating around “The Cape,” as it is still called by sailors, was for generations the only way to get from Europe to Asia or Australia.

Unfortunately, getting around The Cape Of Good Hope was also the most dangerous part of the voyage – because it was here that the weather would often be the most cold and stormy of the entire trip.

Today, The Cape of Good Hope exists as a nature preserve and monument to honor the sailors who made trade possible between the East and West – at a great risk to their own lives.

Of special interest are the African penguins that make their home on the beach on the Cape of Good Hope. These beautiful wild birds are not the least bit scared of humans – so you can get fairly closer to them. Be careful, however, because if you annoy them, they will bite!

If you want to get out of the city for a day or two, you might want to unleash your inner lion and go on any number of the safari tours that operate out of Cape Town. 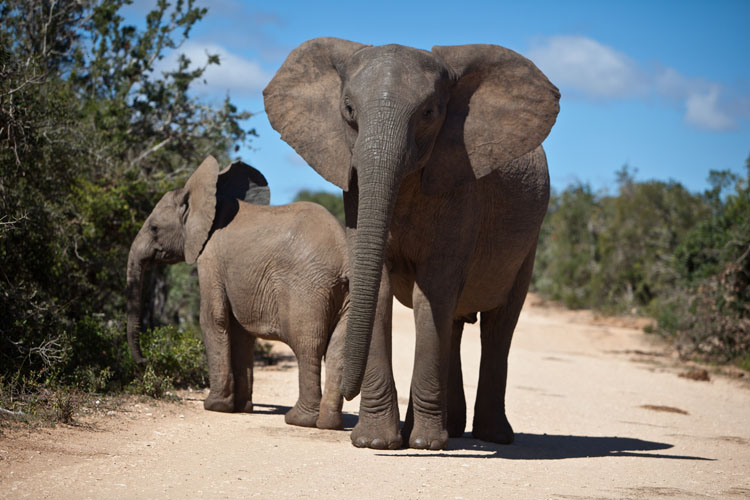 You can choose almost any type of trip you want – from weeklong jaunts into the jungle to daytime excursions in the Sibuya Game Reserve. No matter what you pick, you’ll see lions, giraffes, elephants, and many other animals in their natural habitat.

Personally, I always bring my own “bear” with me when I go on safari. He helps keep me warm in my tent!

Safaris can be arranged months in advance, or you can try to find an extra seat on the day of the trip – particularly if you are in Cape Town during the off-season.

If you like surfer boys – and who doesn’t – you might want to head down and get tickets for the annual Big Wave Africa surfing competition, held every year between July and August.

Big Wave Africa is considered the biggest competitive surfing event in the world, and expert surfers from all over come down and try to ride the big waves to victory. 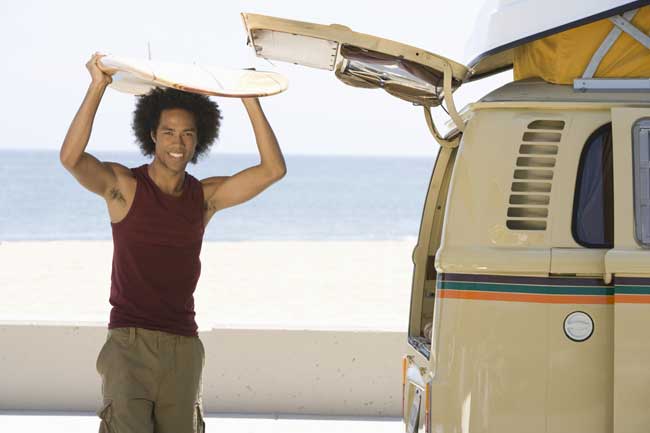 You’ll see some incredibly hot guys get wet and wild on their well-waxed boards – the eye candy alone is enough to one blush from their head right down to their dainty little toes!

The Victoria And Alfred Waterfront

The most fabulous shopping to do in Cape Town is at the Victoria and Alfred Waterfront – which was built on a section of the old Cape Town docks. 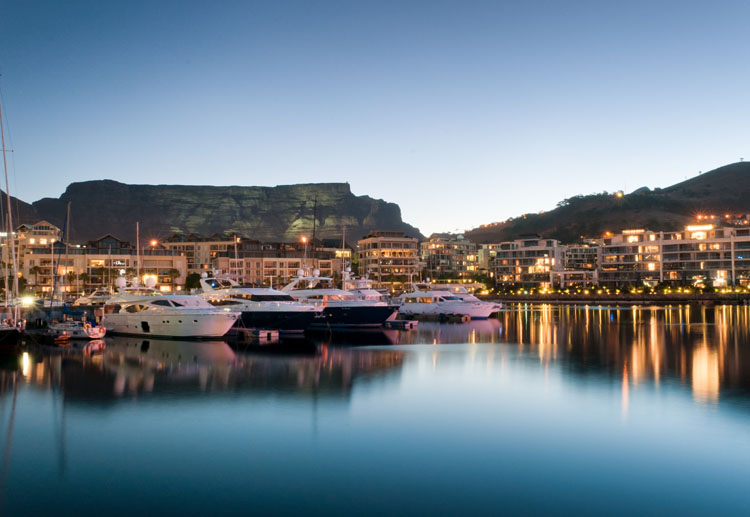 There are also absolutely delish restaurants here – many with tables overlooking the still-working port. You can dine alfresco while watching the sailors pull in and out, and wave at the cruise ships before having your own nightly cruising adventures!

The Victoria and Alfred Waterfront is also home to the Two Oceans Aquarium – which has sea creatures from both the Atlantic and Pacific oceans.

Whether you want to look at lions with your bear or simply lie on the beach bare, Cape Town has exactly what you are looking for. 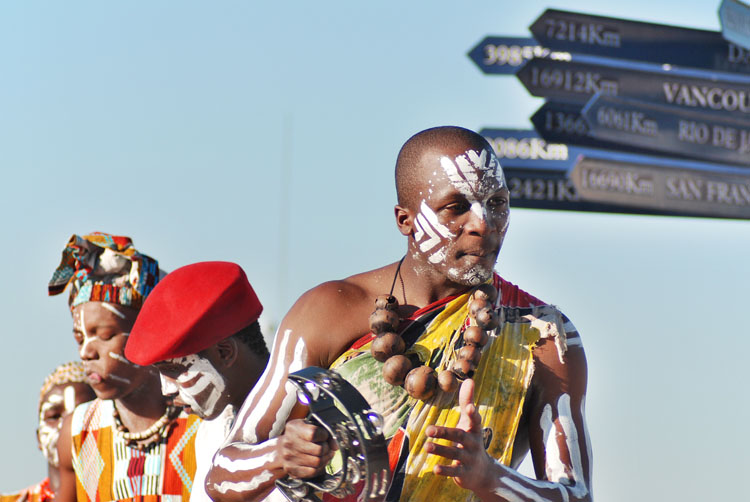 Between hot surfers and one of the best all drag parties in the world, this South African city will keep you teased and titillated until you find the manly satisfaction you know you need!

Cape Town is one of the coolest gay vacation spots on the planet – so why not book your next trip to The Mother City? Oh, Big Daddy! 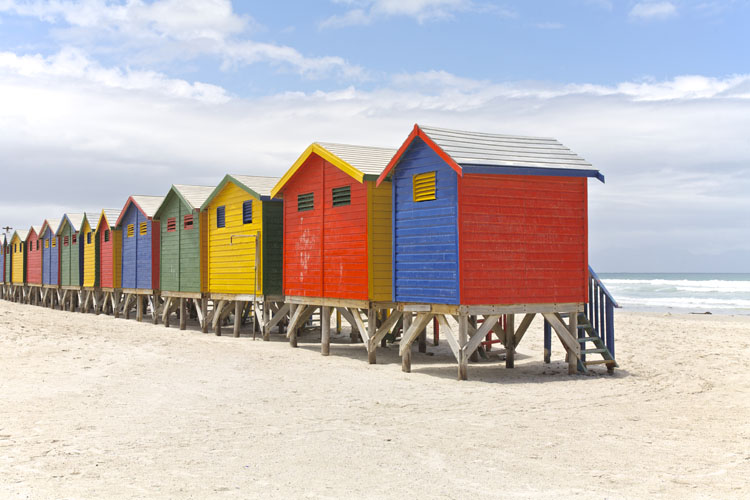