Who doesn’t like a bit of sausage between their lips? I know that whenever I have a foot-long Frankfurter before bedtime, I always sleep like a queen! 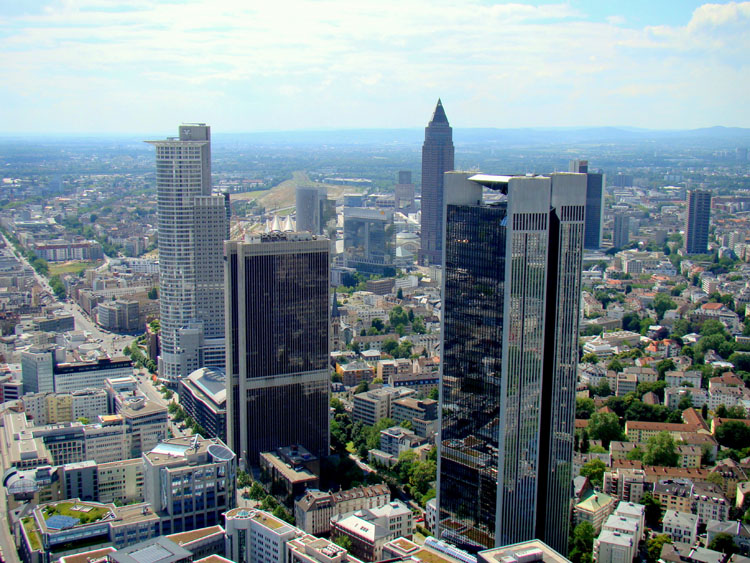 Of course, it helps if I’ve already spent the evening dancing the night away – which is why Frankfurt, Germany will always have a special place in our hungry hearts!

Known in Europe as “The Big Apple,” Frankfurt is the financial center of the European Union, and also home to one of the hottest and dirtiest gay scenes on the continent – which means you’ll find lots of sugar daddies looking for personal penile assistants!

Or, you could just open up your own sperm bank!

Like most of Germany, Frankfurt is very gay friendly and always on the cutting edge of the club scene. This is where people come to dance the night away – first in the clubs and then between the sheets. 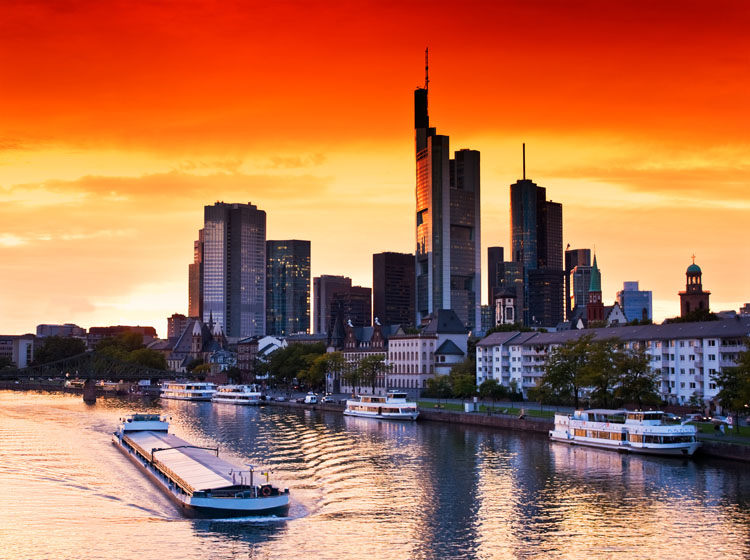 The city itself is an odd mixture of centuries-old churches and the biggest skyscrapers in Europe. You’ll find yourself on streets that are a combination of ultra-modern and medieval architecture.

What you will find is that while Frankfurters (as the residents call themselves) can be serious and business-oriented during the day, they are often cockaholic party animals at night – capable of dancing until dawn and then hitting a business meeting to decide the fate of the world economy in the morning!

So, let us be your guide to Frankfurt, Germany.

I can’t wait to see your hot dogs and big apples!

Your first stop on your Frankfurt gaycation should be The Switchboard – located on Alte Gasse. The Switchboard is the city’s official gay tourist information center and a rocking beer garden all rolled up in one.

The boys behind the bar will be more than happy to help you with any information you need – ranging from where the hottest circuit parties are being held, where to find a doctor if you need one, to even up to the minute recommendations about the trendiest gay-friendly restaurants in the city. 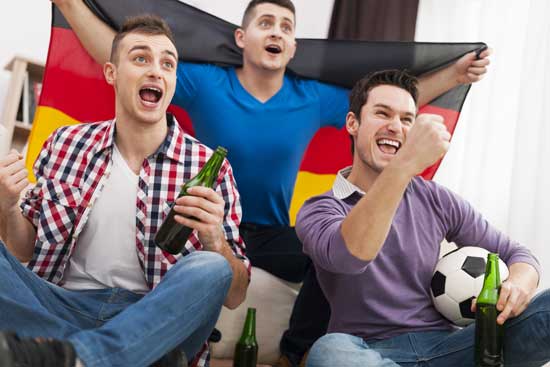 If you sit down and have a beer, you’ll be more likely than not to run into other newly arrived gay tourists and cockalicious travelers.

The beer boys speak English, and they know what you want – and more importantly, exactly what you need! 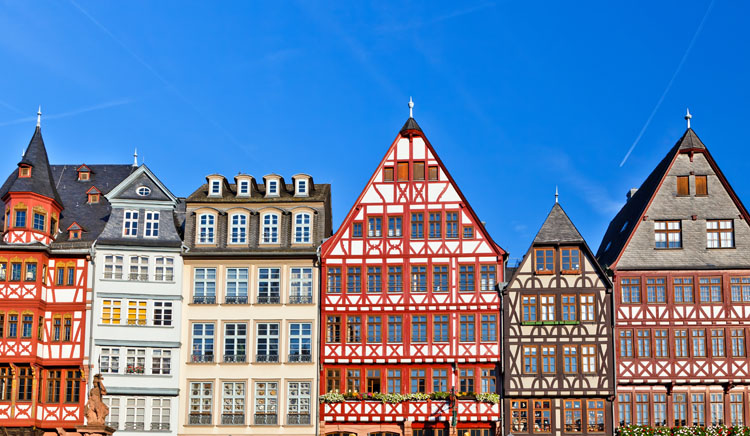 Frankfurt’s main Gayborhood is called The Bermuda Triangle – and is located around Konstabler Wache square in the heart of the city.

This is where you’ll find a bevy of beautifully bubblicious gay bars and clubs, tattoo parlors, saunas, and adult bookstores.

It is also glory hole heaven – with enough sex booths to fill your hot dog bun all night and day.

You simply have to check out the Tanzschule Bappler where Baebbi la Belle, the most delicious drag queen in all of Europe, does nightly shows for all the divine diva worshipers in the city. Their dress code is even stricter than most high-end places – so you’ll want to bust out your chaps and leave your polo shirts at home if you want to get your gay on with a hot German leather master!

A little bit of warning – several of the bars in the Bermuda Triangle are straight bars during the day and only become gay bars at night. You’ll often see the straight clientèle start to head out around dusk – while the bar staff goes outside to raise a rainbow flag and let the cock cruisers know they are open for business!

Get into the grove guys! Did you know that Frankfurt is where techno music was invented, in the early 1990s?

It’s true! It was in the clubs around the Bermuda Triangle where legendary DJs first started creating what would eventually become the soundtrack of any gay slut’s nighttime adventures. 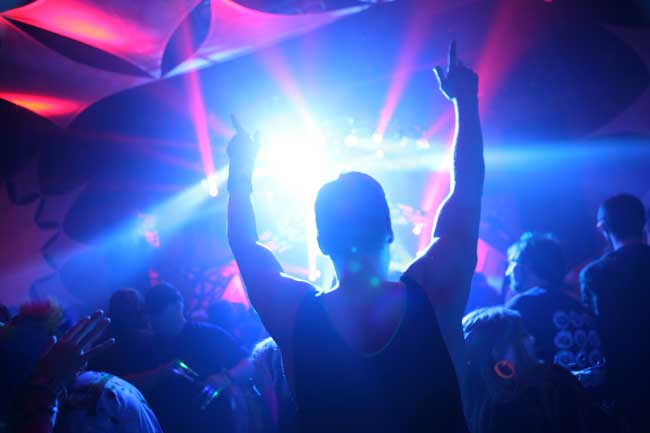 Techno is still king in Frankfurt – and the world’s hottest DJs still rule the club scene at night. Here is where you’ll find the hottest new tracks and some of the most cutting edge dance music in the world – often months or years before it hits the New York, London, or San Francisco scene.

That’s why the clubs here are considered some of the best in the world and you’ll want to dance the night away – until, that is, you find Mr. Right Now and head off into the darkroom to get your own personal grove on!

Today’s modern hot dog, the Frankfurter, was invented in Frankfurt. Imagine that!

While in America the Frankfurter is considered a quick snack in the big city or an easy lunch for kids, in Frankfurt they take their hot dogs as seriously as I take a foot-long on a Friday night!

You’ll find that dozens of varieties of frankfurters are available at nearly any of the local restaurants in town – and you can choose from bland American-style hot dogs to spicy pork varieties that might just kick in your gag reflex – if you have one, that is!

The highlight of the gay calendar in Frankfurt is the annual Christopher Street Day party, held every July by The Pink Cavalcade – the biggest gay group in the city.

The parade comes on the last day of a three-day party leading up Christopher Street Day, with lots of intense cock cruising in the pedestrian areas of the city and huge all-night parties at most of the gay bars and clubs.

The second most divalicious event on the Frankfurt gay agenda is the Rainbow Quai – a three-day-long gay food fest held every August. It draws more than two million people a year – unfortunately, many of them hungry straight boys who prefer tuna subs to old-fashioned Frankfurters!

The Rainbow Quai invites gay chefs from around the world who line the street selling – and sometimes giving away – samples of their haute cuisine.

Meanwhile, during the three-day food extravaganza the city’s best techno DJs are invited to set up in the streets around the food stalls, so people are able to dance off all those extra calories – no matter how much meat you’ve shoved into your dirty little mouth!

Just relax and try not to choke, and your belly will be full in no time at all! The cultural hub of Frankfurt is The Museum Riverbank, on both sides of the River Main in the north side of the old city center.

There are 13 delightfully historic museums, all within easy walking distance of each other. The most important of the bunch is the Stadel Museum – home to the finest collection of works of Botticelli in Europe. You’ll be able to see dozens of his paintings, and try to pick out which one looks the most like your own personal fag hag! The Stadel also has an important collection of Degas and Beckman paintings, as well as more than six hundred sculptures.

All of the museums are delightful, and you can spend days here finding everything from the most cutting-edge modern art to the most divine Renaissance-era paintings you’ve ever laid your dreamy eyes on.

If you come to The Museum Riverbank on Saturdays, you’ll find the street has been closed to automobile traffic so that it can host Germany’s largest weekly flea market., which means you can soak up art for a few hours and then get some glorious shopping done as you leave! The most fabulous and beautiful monument in Frankfurt is St. Paul’s Church. It is dear to the heart of the German community because this is where the first democratically elected parliament served in 1848.

It was partially bombed during World War II, but the damaged sections were immediately rebuilt. The result is an interesting mix of ancient architecture with new modern additions to replace the damaged areas.

It is no longer used as a church, but rather as the site of deliciously divine art exhibitions and other cultural events. If you are a history guy – as I am – St. Bartholomeus Cathedral is not only beautiful but also very historically important.

This beautiful Gothic-style cathedral was where all of the emperors of the Holy Roman Empire were crowned – and today it stands as the home of the German Catholic Church.

The inside is beautiful, with classic stained glass windows and a sense of history that will bring you to your knees – assuming you haven’t already done so in the Bermuda Triangle!
Do I Have To Shove It Down Your Throat? Come Visit Frankfurt And Find Out If You Can Swallow A Really Spicy Sausage!

What more could you ask in this beautiful city on the river? You can eat all day and then dance the night away – before heading into the dark room of your choice to find your own Frankfurter!

So book your next trip to Frankfurt today! 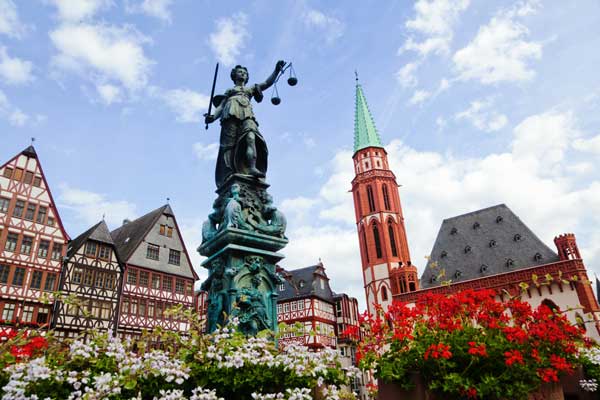