Gay Istanbul – Tiptoe Through The Tulips 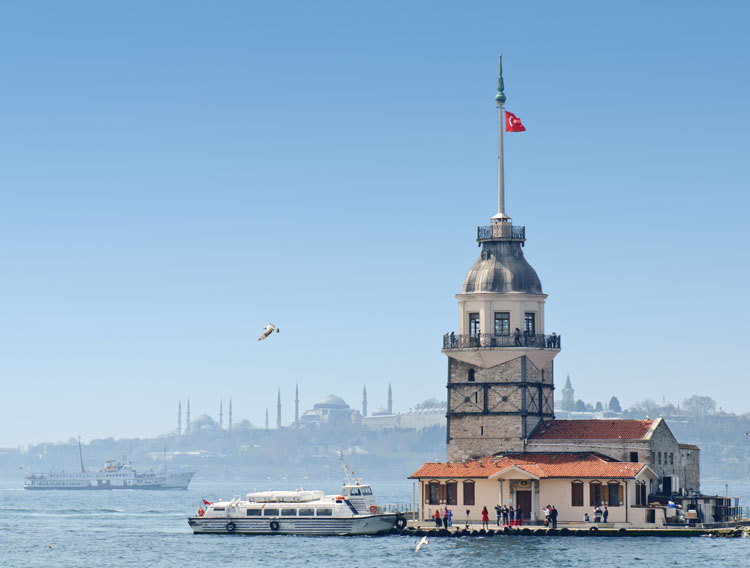 Ever had cocktails in one continent and dinner in another? This, my turgid little twinks, tight little bottoms and terrific tops is the one place on our gay planet where this remarkable feat can be accomplished. 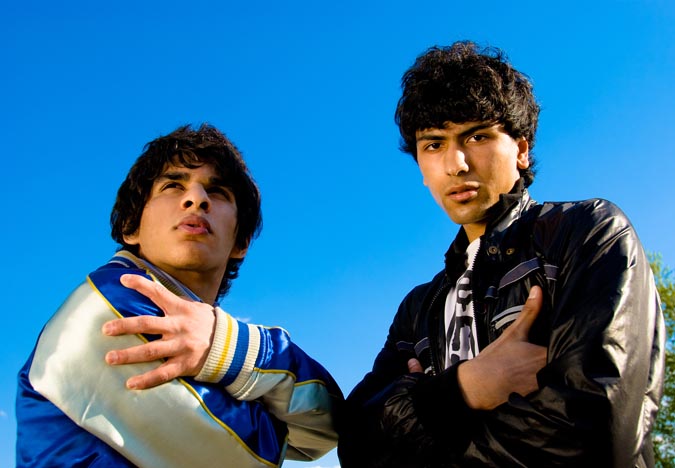 And with luck you might find a gorgeous hunk to make your after dinner escapade even more enjoyable. 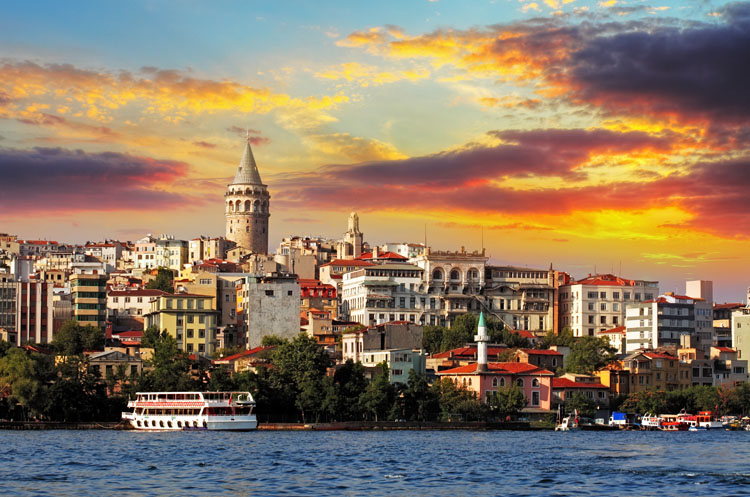 Blame it on the Romans. As that Empire expanded east, taxes and other duties took far too long to reach Rome and were always subject to raids by marauding tribes. So in the early 4th century, Emperor Constantine decided the Empire be spilt in two. For the eastern half, he set up shop in the small town of Byzantium which he renamed Constantinople. Little over a century later, barbarian tribes from the north reached Rome and sacked it. The centre of the Roman Empire was now Christian Constantinople. Let’s take a journey to Istanbul, where you’ll want to go down and get your hoe down. If you’ve ever had a fetish for straight boys, Istanbul is going to be your dream vacation. It is full of very, very straight-acting bi guys. In fact, the guys are so straight-acting they consider themselves straight. 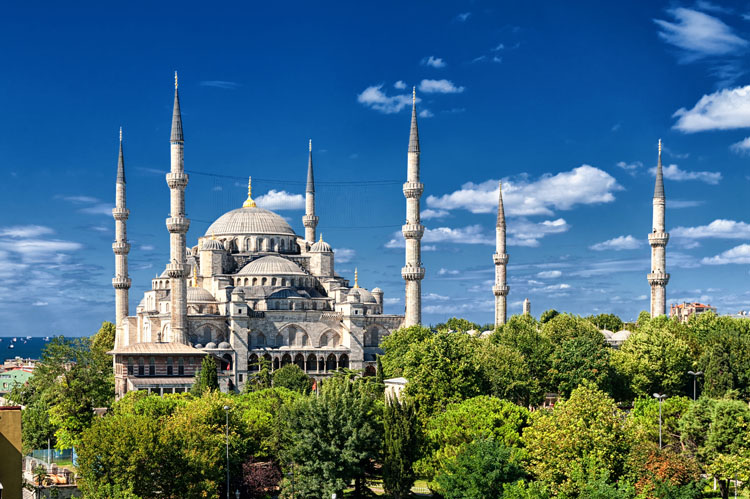 Constantinople was soon the richest city the world had ever seen. It reached its peak at the time of Emperor Justinian in the mid 6th century. Thereafter, as the key city on the Silk Road it retained its riches and importance, but its land area was being gobbled up as the new Muslim Empire in the East rapidly expanded. Renamed the Byzantine Empire, things got so bad its Emperor Alexios wrote to Pope Urban II in 1095 asking for a small force of knights to help repel the Muslims and restore Jerusalem for Christianity. Urban saw a way to ensure his place in history. Instead of a small force, he called for a massive army to march to the Holy Land. He promised all who took part a special indulgence that would guarantee them the keys to Heaven. Thus a vast undisciplined army of mostly vagabonds, criminals and wastrels ransacked their way across Europe. When the Muslims had taken Jerusalem, it was all but a bloodless invasion. Thereafter Jews and Christians could worship freely provided they paid taxes to the Muslim administrators. When Urban’s rabble reached Jerusalem, they massacred the Muslims and Jews. One commentator wrote that the streets ran with blood for days. 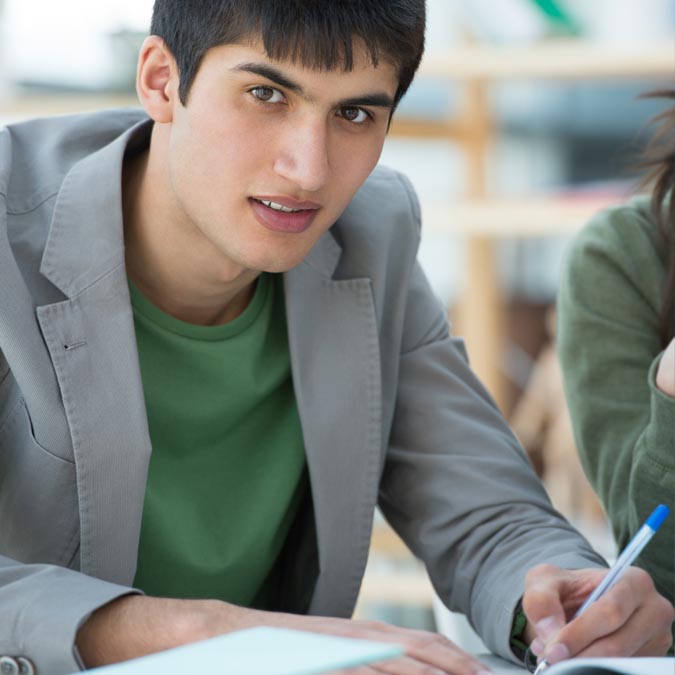 Saladin and his forces quickly retook Jerusalem n 1187 and more Crusades were sent from Europe, none successful. The fourth originated in Venice and was led by a wily octogenarian Archbishop Dandolo. But Dandolo had absolutely no interest in Jerusalem. He coveted the riches of Constantinople. So after his armada turned left at the foot of Greece, he ordered it north-east where he laid siege to Constantinople. After capturing and looting the city, they turned back to Venice where many of the treasures of old Constantinople can be seen today. Dandolo’s forces had so weakened Constantinople that it was unable to repel the Ottoman Turks who captured the city in 1453. Renamed Istanbul, it has remained in Muslim hands ever since.

Istanbul basically comprises three areas bisected from north to south by the Bosphorus, one of the world’s busiest waterways running from the Aegean Sea north up to the Black Sea, and on its west side – the European side – by The Golden Horn, a flooded river valley and impressive natural harbour. Most tourist sights are in the city’s south – in Seraglio Point, Sultanahmet and the Bazaar Quarter, and it is here you will probably spend most of your time. 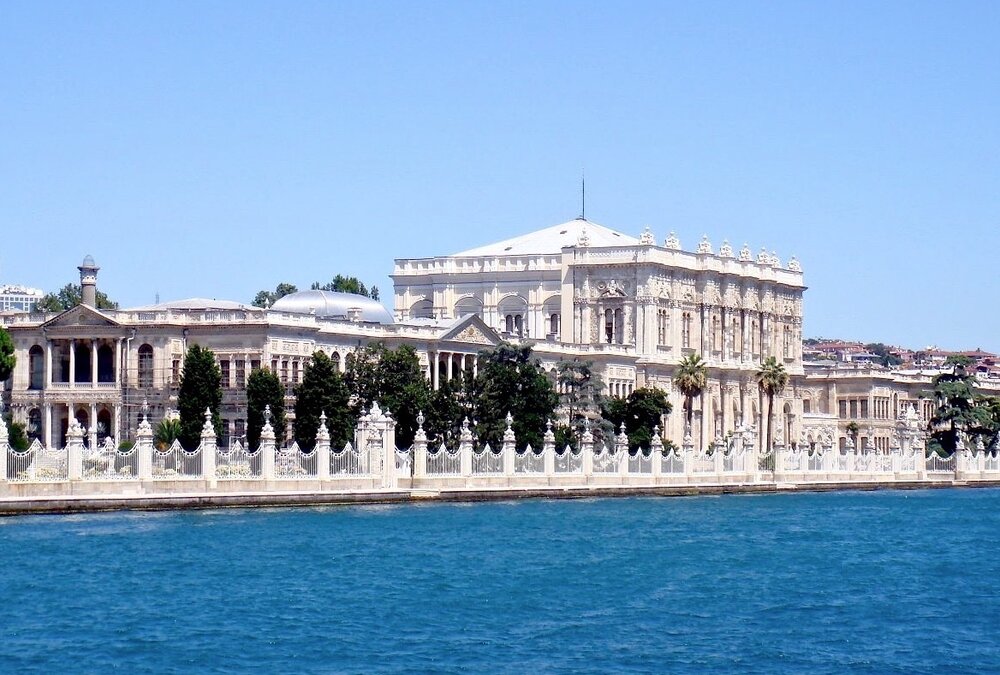 But to get your bearings start north of the Golden Horn in the more modern district of Beyoğlu. Make your way to the 62-meter high circular Galata Tower. Built in 1348 this offers amazing panoramic views. You get to the top either by a narrow spiral staircase or for the less agile by lift. 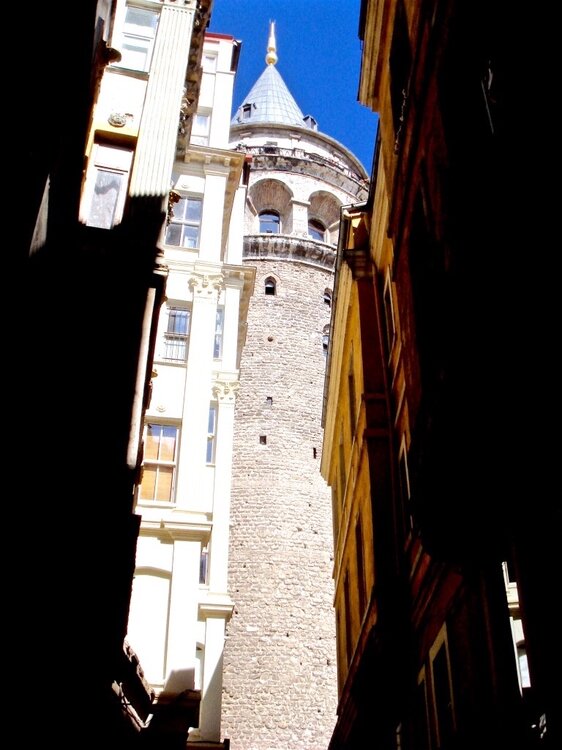 Not far from the Tower is the legendary Pera Palais Hotel. This was built to accommodate passengers who had arrived in the city from the new luxury Orient Express train. Among its many famous visitors, Agatha Christie stayed here and allegedly wrote her mystery novel Murder on the Orient Express in room 411. Other important guests included Greta Garbo and Ernest Hemingway. Take time for a quick coffee or apple tea in its luxuriously renovated surroundings. 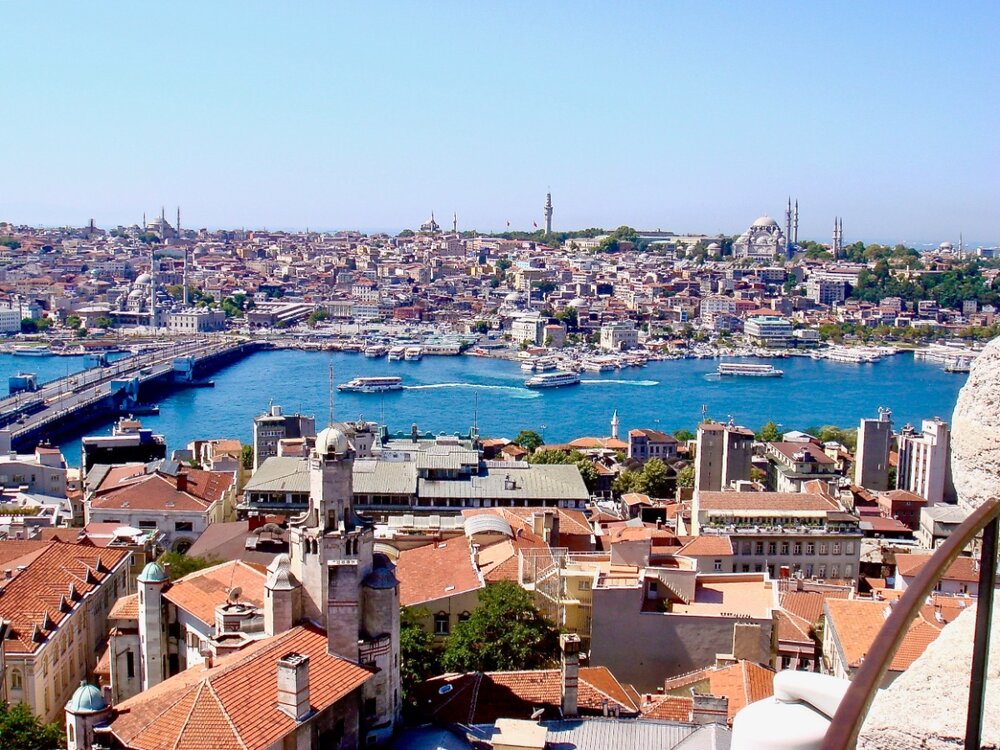 Now head for Sultanahmet south of the Golden Horn. Hop on the tram which takes you across the bridge and whisks you up the hill. The Sultanahmet stop leaves you by a small park linking two buildings – Hagia Sophia on the left and the Blue Mosque on the right. The first thing you notice about Hagia Sophia is its size. It is vast! The dome reaches up a full 55 meters. As you walk through its massive doors you will gasp, for recall that this building was constructed more than 1,500 years ago. For nearly a millennium it was a Christian Church with Christian mosaics still seen on the balcony level, then converted to a Mosque, then a Museum and now under the present pro-Islamist President to a Mosque again.

The nearby Blue Mosque acts as a near-perfect balance to Hagia Sophia. Built in the early 17th century, this is another massive space that gets is name from the blue Iznik tiles that adorn most of the interior. Make your next stop the Grand Bazaar a little further west. As befits a city that was a vital link on the ancient Silk Road, Istanbul breathes commerce. Nowhere is this more obvious than in the Bazaar. A labyrinth of narrow alleyways, the Bazaar can be entered from several gateways. It’s fun just to wander at will watching the traders entice potential buyers into their small shops and working hard to make a sale. You can get lost here, though, and so a map is useful. Exit towards the north-west to visit the Süleymaniye Mosque, the city’s largest, built to commemorate Sultan Süleyman the Magnificent. Then take a seat in nearby Beyazit Square and watch all the gorgeous guys coming through the Moorish Gateway to Istanbul University.

For another day, set aside at least 3 hours to visit Seraglio Point not far from Hagia Sophia. The fascination here is the wondrous Topkapi Palace standing on the corner bordered by the Bosphorus and the Golden Horn. Its many pavilions, lavish apartments and courtyards were constructed between 1459 and 1465. The Sultans and their harems lived here until moving in 1853 to the more modern Dolmabahçe palace by the Bosphorus. During your visit, take a break at the open-air café on the northeast corner reached by steps down the side of the Konyali Restaurant. Here you can enjoy an al fresco coffee and some delicious baklava as you watch all the water traffic moving through the Bosphorus. For yet another half day, board one of the many tourist boats at the south side of the Galata Bridge for a trip up the Bosphorus. This takes you past Dolmabahçe Palace – itself well worth a separate visit – and some magnificent homes of Istanbul’s rich and famous. The gay district of Istanbul used to be centred around the bars and cafes near Taksim Square and Beyoğlu. Where the city was once a gay haven, its increasing Islamization under President Erdoğan, especially since the failed military coup in 2016, has increased homophobia. Although sex between consenting men aged 18 and above is not a criminal act, the present regime has made known its anti-homosexual stance in too many ways.

Increasingly a barrage of homophobic rhetoric has tarnished the city’s image as a relatively open Muslim society. In April 2020 the head of the state’s Religious Affairs Directorate preached in a televised sermon on the coronavirus outbreak that Islam condemns homosexuality because “it brings illness and decay.” Erdoğan endorsed these remarks.

Visiting a Turkish Bath can be fun and invigorating. Unlike gay saunas in other countries, although naked you have always to cover your jewels with underwear or a small towel in these hammams. No matter how handsome your masseur and how tempting as he pummels and scrubs your skin, happy endings are definitely not on the menu.

Despite the restrictions some gay bars still remain open and you will definitely find fun on the apps. They will be busy. Just be careful. You’ll be delighted to know that in Istanbul, prostitution is completely and totally legal. And, you’ll find rent boys working nearly every gay bar and club in the city. It’s also fairly easy to find Istanbul rent boys online. 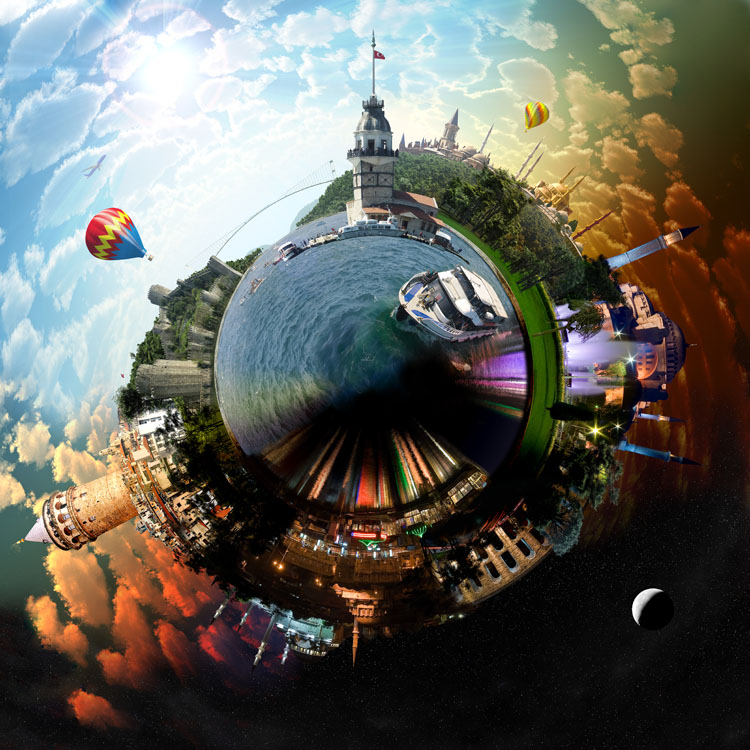 Be sure, however, to ask if they are “aktif,” which would mean they only top and never bottom, so you don’t get disappointed when you get them back to your hotel room.

Being Safe In Istanbul

The one downside to Istanbul is that because it is a poor country, there is a fairly high minor crime rate. It is advised that you don’t ask people on the street directions, because there is a good chance they will steer you into a side street where people are waiting to mug you. Instead, either travel around by taxi or hire one of the many professional guides offered by every hotel. You should also be aware that it is common in Istanbul to negotiate the price of the cab fare before you get into the taxi. If you don’t, they may try to rip you off by charging you much more than they should for your trip. Let’s Do Straight Boys In Istanbul!

I’m up for Middle Eastern men who are straight but not narrow! So, why not join me in Istanbul, and get it on?

Thanks PeterRS for the great additions, updates, and photos!

Here is a good trip report from gay Istanbul.