Gay Los Cabos, Mexico: Sun And Fun Even Your Family Can Enjoy!

We all love to take trips to the cockalicious cruising spots in San Francisco’s Castro, the divine debauchery of Berlin, and the raunchiness of Rio de Janeiro.

But, we don’t want every vacation to be about sexploitation! Sometimes we get tired of hitting the circuit, primping our pecs and shaking our ass. Instead, we just want to chill out on the beach with no pressure to look good and be bad.

Maybe we want to hang out with our sister and her family and not worry about running into any of our manly mistakes or risk shocking our nieces and nephews. Other times, we may be just out of a relationship and simply tired of men for the moment and yearning for sun and solitude!

If that’s the kind of mellow mood you’re in – or if you are looking for someplace to hang out with your family – Los Cabos may be the vacation spot for you!

While Los Cabos has almost no gay scene at all, it does have beautiful beaches, luxurious resorts, and lots of chances for fun in the sun!

The majority of the permanent residents are American expatriates and retirees, so you’ll have no problem speaking the language. The weather on this tip of the Baja Peninsula is almost always perfect, and everything is as chilled as can be!

Los Cabos is actually the name for two sister cities next door to each other on the peninsula – Cabo St. Lucas and St. Jose del Cabo. The two cities share the same sandy beaches, but could not be less alike! Cabo St. Lucas is where the serious partying occurs – cruise ships drop off thousands of thirsty passengers a day and the bars and clubs rock out all night. It’s also where the more affordable hotels are and where many Americans own time-shares.

That said, most of the beaches are public, and if you behave yourself you can spend a quiet day on the sand in St. Jose del Cabo.

Just keep your eyes out for the celebrities!

Between the two Cabos are dozens of hotels – many of which are the size of Las Vegas casinos, and nearly all of which have all-inclusive deals. In fact, lots of tourists never leave their hotels at all except for short excursions to the beach.

Both Cabo St. Lucas and St. Jose del Cabo are fabulous in their own way. You just have to decide if you are there to party or if you want to soak up the rays!

Los Cabos is filled with pristine sandy white beaches and that are always full of man candy for you to feast your eyes on!

But, you have to be careful when you go out for your fun in the sun. Because Los Cabos is on a very rocky peninsula, it is too dangerous to swim in the water. In fact, even the official Los Cabos tourist office recommends that people do most of their swimming in their hotel pools!

There are two stretches of beach where you can occasionally swim – Lover’s Beach and Divorce Beach. There are no lifeguards – but the authorities do post signs on both beaches on days when the tide is mild enough to permit you to dip your toes in the water. Just be careful – this is about as dangerous as you can get while getting wet!

The Rainbow Bar And Lounge

Shockingly, Los Cabos has no gayborhood or beach cruising areas. It does, however, have one gay bar, The Rainbow Bar and Lounge.

This is the type of gay bar that you could easily bring your sister or brother to. It doesn’t have a backroom, strippers,  a rentboy scene, or any other obvious naughty nastiness. Instead, it has two giant rooms – one of which is a fairly happening gay disco, and the other is a quiet cocktail lounge.

It’s easy to find The Rainbow Bar and Lounge in Cabo St. Lucas – just look for the only building with a giant rainbow flag on top. 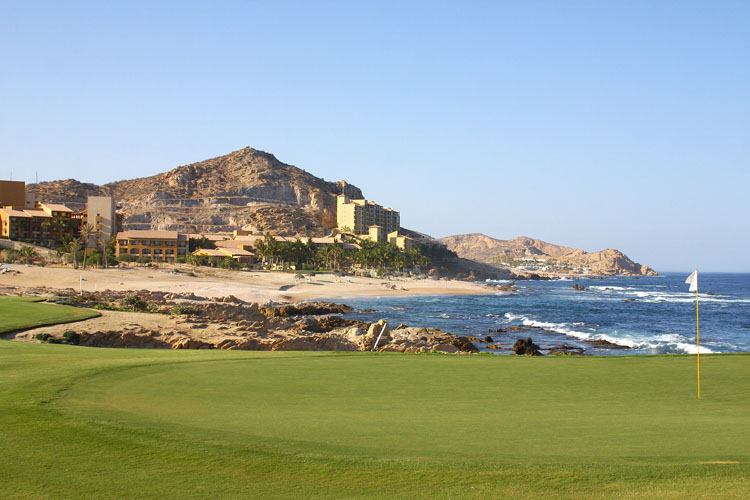 The bar itself is very straight friendly and you’ll find excellent cocktails in the lounge area. Plus there is no cover charge, and it’s open seven days a week until 4 a.m.

The Radiance Of The Seas

If you want to experience the calm of Los Cabos but don’t want to feel like you are entirely surrounded by breeders, tuna and their spawn, you might want to consider heading down on the Radiance of the Seas.

This is an all-gay male cruise from California to Los Cabos and back. You stay on the ship when you are in town – which has several gay bars and clubs, and all the on-ship cruising you could possibly handle.

Once you take the cruise you only have to head into Los Cabos during the day for shopping or hitting the sand. Then you can go back and find someone who floats your boat! Hagar has completely devoted himself to the Los Cabos lifestyle – he owns his own bar, the Cabo Wabo Cantina, and also distills and sells his own brand of tequila called Cabo Wabo.

The Cabo Wabo Cantina is one of the most popular bars in Los Cabos – and features live rock and roll and every type of tequila drink you could possibly swallow.

Many of the patrons are members of Hagar’s official fan club, the Redheads.

Hagar’s band – Sammy and the Wabos – are also known to jump up on stage at night on a semi-regular basis for mini impromptu concerts. This has become particularly satisfying for Van Halen fans recently – ever since longtime Van Halen bassist Michael Anthony joined the Wabos after Eddie Van Halen fired him from Van Halen itself last year.

In fact, if you are a groupie guy at all for rock dudes, the Cabo Wabo Cantina is almost always worth checking out – because lots of Hagar’s famous friends are known to walk up on stage and play with the house band on random nights.

One of the most popular activities in Los Cabos is going deep-sea fishing on any of the dozens of charter boats available at the port.

Los Cabos is known for having the largest natural marlin population of any area in the world – and it hosts a huge marlin fishing contest every year. Overall, the fishing in the waters outside of Los Cabos is considered the best in the northern hemisphere.

If cruising for marlin isn’t your thing, every winter the same charter boats will take you out to see the hundreds of baby whales that are born and raised here. The mama whales give birth here in the winter because the waters are warmer than anywhere else in the region, and there are few natural predators to bother their whale calves while they are grown up!

The most distinctive natural formation in Los Cabos is Land’s End – a giant rock formation that won’t send you tons of catalogs in the mail!

The locals call Land’s End “El Arco” because from one angle it looks like a giant natural stone arch in the middle of the water. Seen from another angle, however, it resembles a giant triceratops taking a drink of water!

It takes the name Land’s End because early explorers who had yet to discover South America thought that this was literally where the New World Ended.

To Cruise Or Not To Cruise – The Gay Los Cabos Question!

Whether you want to go fishing, sit on a beach, or simply sip blended tequila drinks by the hotel pool, Los Cabos is one of the most beautiful and relaxing vacation destinations you’ll ever discover.

You can’t cruise the parks, but you can cruise down to Los Cabos in style, and once you are there, you can spend your time looking for celebrities or simply sunning it up and sleeping the day away!

So, the next time you want to get away from the circuit or take your sister on vacation, think about Los Cabos!

It might just rock your world – even if you aren’t a Redhead!