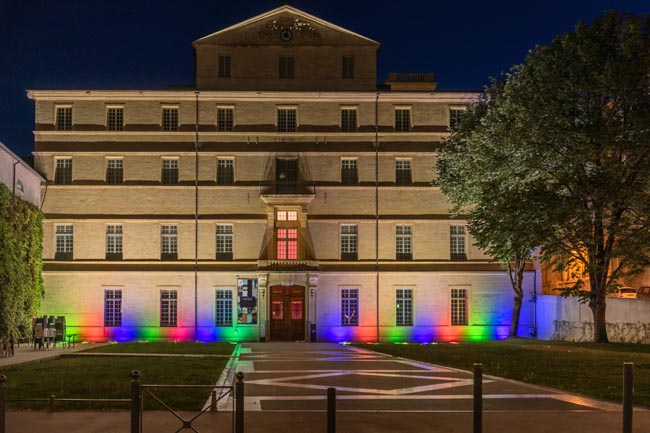 Imagine a warm Mediterranean city filled with young gay men who speak English – but without any of the tourist shops or hassle you have to deal with when you visit Nice, Cannes, or Paris! If that sounds like fun, Boytoy wants to let you in on the best-kept gay secret in Europe – Montpellier, France!

Located in the Languedoc region of France near the Spanish border, you’ll find many men ready willing and able to speak “Langue Cock!”

Once considered off the beaten path, the development of cheap flights from London and fast trains from Paris over the past dozen years has turned this student town into one of the most popular gay destinations in all of Europe! Yet, the word has yet to catch on in America – so the French here don’t hate us yet, prices are much cheaper than Paris and your cut cock will still be a novelty item to the Montpellier boys!

The median age for Montpellier residents is 30 years old, and the city has a higher per capita gay population than Paris or London – meaning that you can find all the gay men you can swallow and almost never have to see a gray pube on your entire trip!

Better still the weather is almost always warm, there is an entire nude village nearby, you can be on the beach in about 15 minutes and easily get your ass to the clubs at night, without breaking the bank!

You’ll find that even in high season, hotel rooms in Montpellier cost about half what they do in Nice or Cannes, and the beaches are far less crowded than any of the marquee Mediterranean beaches. But, you’ll want to visit soon, because a gay vacation destination this good won’t remain a secret forever – and you want to get your ass over here while you can still find fresh meat!

The city also has a fairly compact and pedestrian-friendly center of town, lots of resources for English speakers and its own quality cuisine to fill your belly before you head out to score!

So, my delightful drag queens, delicious divas, smooth twinks and burly bears, let us take you somewhere you’ve never been before – to the Roman ruins and kick-ass clubs of Montpellier, France!

Clubbing For Guys in Gay Montpellier

In Montpellier, satisfying your cockaholic cravings is all about hitting the club scene and shaking your sassy ass!
Unlike most of the gay bars and clubs in America, the Montpellier gay scene is mixed between gay men and lesbians – so on any given night you’ll see both boys and girls in any bar or club.

In the center of town, Heaven is the most well-known and longest-running of all of the gay bars – and where you want to go early in the night. The bar opens around 8 p.m. and people start dancing around 10. The scene is always hot, but because they only have a 1 a.m. license the night tends to end early!

Heaven is a mix of young student boytoy types and older sugar daddy types. Twice a month they hold lesbian only nights called “Ovaireland” – which you’ll probably want to avoid.

For a harder scene, you can visit TNT in the city center – which is a newer, trendier, and much more hardcore gay bar – which also closes at 1 a.m.

If you want to dance the night away, the larger gay clubs don’t open until midnight and most of them stay rocking until around 5 or 6 a.m. They are all located outside the city center, but most of them run shuttle buses between the train station and the clubs all night long during the spring and summer.

The gay clubs around Villa Rouge are constantly changing their names – but all of them are known for dirty dancing and delightful dicking!

If you are tired of speaking French and feel like grabbing a cocktail before the gay bars open, you can visit the Vert Anglais – right around the corner from Heaven – a mostly straight, but very gay-friendly, bar where all of the staff are British, Canadian or English.

Their cosmos and chocolate martinis have brought many a gay to their knees! Most of the center of Montpellier – known as Centre Ville – is one large gay neighborhood. You’ll find tons of restaurants with rainbow flags, flyers for the gay bars and clubs, and lots of men checking each other out everywhere you go. You’ll even discover Carla’s Eyeworks – a gay eyeglass shop!

In fact, the only places that are not gay friendly in Montpellier are the two Irish sports bars – but these homophobes are obvious and easy to avoid! Just walk away as soon as you see a Guinness sign!

But, the gayest part of this gaytown is the Place du Marche Aux Fleurs, behind the Prefecture. Here you’ll find four gay daytime cafes surrounding a beautiful French square. Heaven is right around the corner as are several sex shops, a gay sauna and several gay clothing stores.

At the edge of Centre Ville and roughly three blocks from Marche Aux Fleurs is the Promenade Du Peyrou – a beautiful garden from which you can see all of Montpellier, the Mediterranean, and the mountains – while being just steps away from cockalicious cruising!

The entrance to the Peyrou features an exact replica of the Arc de Triomphe in Paris. When you walk through the arch and cross a street you’ll be in a large stone garden, filled with giant trees and beautiful flowers. 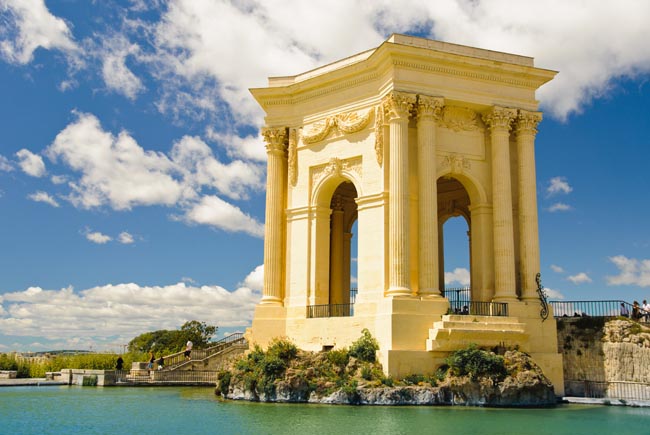 Keep walking and you’ll approach a manmade pond and then the start of the Roman aqueduct. You’ll also be at the highest point in Montpellier. From here you can see lush mountains in the distance and the entire layout of the beautiful city!

The aqueduct is old old old, but has been restored several times over the past few hundred years. If you walk down the steps of the aqueduct during the day, you are likely to find older French men playing a regional version of bocce ball, known as petonk.

At night, however, this area becomes cruising heaven with men literally lining the streets looking to hook up – and there are always a fair number of male prostitutes in the mix – so if you don’t want to pay for it, make sure your man is a volunteer!

To Dress Or Not To Dress – The Montpellier Beach Question

If you visit Montpellier in the spring or summer, you’ll want to hit the beach and visit either Palavas Les Flots or Cap D’Agde. Both beaches are an easy and inexpensive to get to via the local mass transit system.

Palavas Les Flots is a free beach on the Mediterranean surrounded by nice restaurants, gaudy tourist shops, and the smallest, most fagtabulous casino you may have ever seen. It’s all very James Bond in the casino, with men required to wear jackets and waiters ready to bring crisp gin and tonics right to the blackjack table for you.

The beach itself is a nice mix of straight and gay – and if you want to feel extra fabulous you can rent a beach chair for a modest fee and have drinks brought right to your favorite tanning spot all day long.

For those more adventurous among us who like to let it all hang out, Cap D’Agde is one of the hottest beach communities in the world. Not only is the beach itself nude –the entire village is nudist.

You can go to the bank, the post office and even the local restaurants wearing not a stitch of clothing – which means there’s eye candy everywhere, even if you’ll have to see a few fatties along the way!

If Montpellier was a princess, the Place de la Comedie would be the jewel in her crown. Located right in the heart of the city, this square looks like a wedding cake come to life. The giant square is surrounded by four huge cafes. The Opera House and the Esplanade Charles De Gaulle mark off either end of the Comedie – which has some of the best people-watching in the entire world.

The Montpellierans are very relaxed about their cafe culture – so you can easily sit in the Place de la Comedie and nurse a coffee for hours while you watch the people go by.

Behind the Place de la Comedie is the city’s English language movie theater, several sex shops and the Rockstore – a gigantic club that features four different types of music a night in large separate rooms until 5 a.m.

Most of the cafes here close early – so the Place de la Comedie is a total daytime gaytime activity! 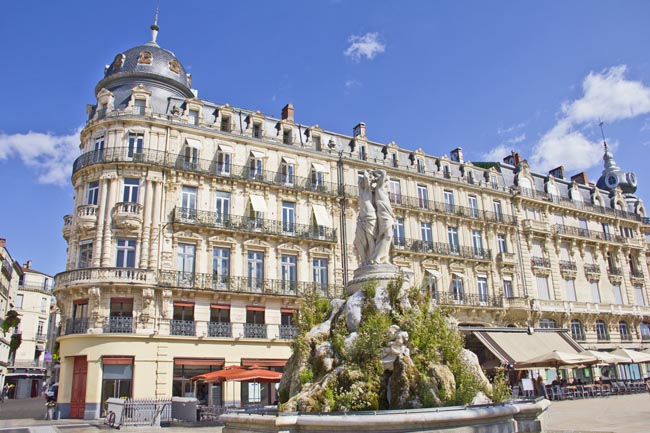 During the day, the Esplanade at the end of the Place de la Comedie is home to a giant open-air market, where you can buy anything and everything from new shoes to beautiful tapestries!

The most spectacular tourist site in the city is the recently reopened Musee Fabre – just steps away from the Place de la Comedie.

The museum was originally opened in the 1825 and was only closed for renovations for about four years at the turn of this century. In 2007 it had a fabulous reopening and now is a wonderful showcase for paintings by Rubens, Dufy, and Marquet among others.

It’s a little bit of culture in this otherwise sin-soaked city! The Montpellier Botanical Gardens is the oldest botanical garden in all of Europe, commissioned by Henry IV in the 1500s.

Today it remains a giant public garden, filled with rare fauna from around the world – and open to the public seven days a week, 365 days a year.

You can literally get lost among the flowers – and easily spend an entire afternoon in the Botanical Gardens – as long as you remember to stop and smell the roses!

Montpellier is a small European city – but it is filled with some of the top name brand clothing stores and boutiques, just like the ones you’d find in Paris.

However, in Montpellier, the prices are lower and the stores are almost never crowded – so you can get a full, big-city shopping experience at Hermes or Armani without any of the big-city hassles! It was enough to make me update my entire wardrobe! I’m still on a shopping high!

For the most fabulous shops, wander up and down Rue Foche and Rue de la Loge, connecting the Place de la Comedie with the Peyrou!

It will take your breath away!

Take A Visit To Montpel-Gay!

If you are tired of the tourists and want to go on a great gaycation where you can shop til you drop, hit the beach and even do your banking au natural – Montpellier, France is where the boys are!

All you have to do is get your sweet ass over there.