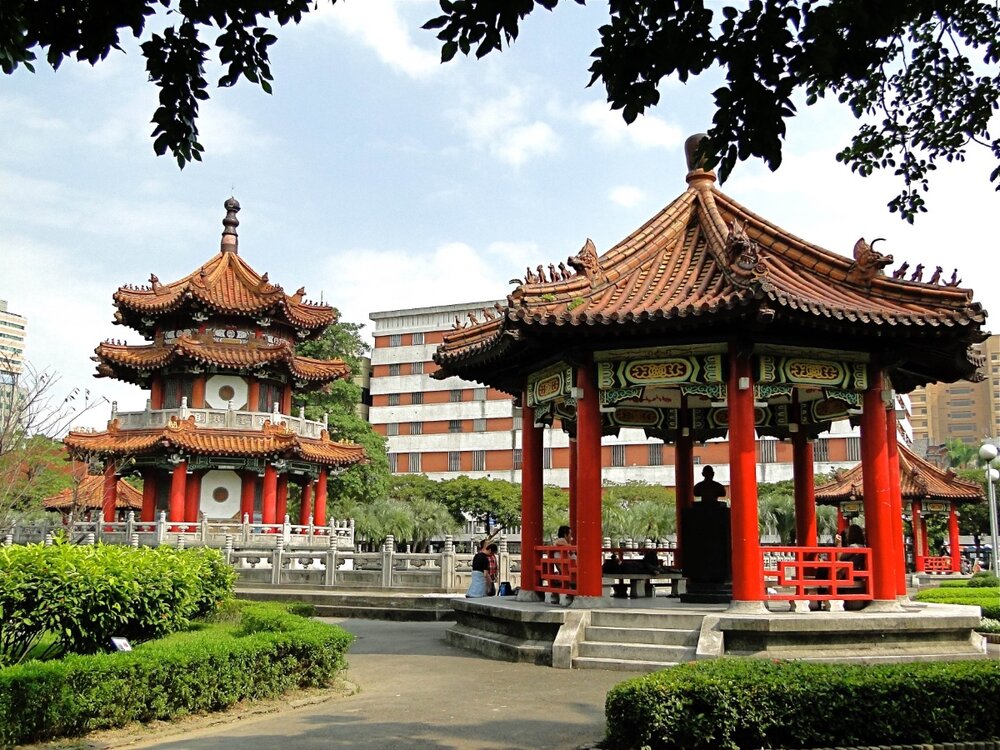 As the gay world knows, in the summer of 2019 Taiwan became the first Asian country to legalise gay marriage. Yet only 33 years earlier the island had just ended a 37-year period of martial law. When Mao’s communist party was victorious in China’s civil war in 1949, his opponent, the warlord Chiang Kai Shek and 2 million of his followers, fled to Taiwan off the mainland’s southeast coast. It was always Chiang’s intention to retake the mainland. With encouragement from Washington Taiwan had become a pawn in the Cold War. But Chiang was never able to realize his dream. 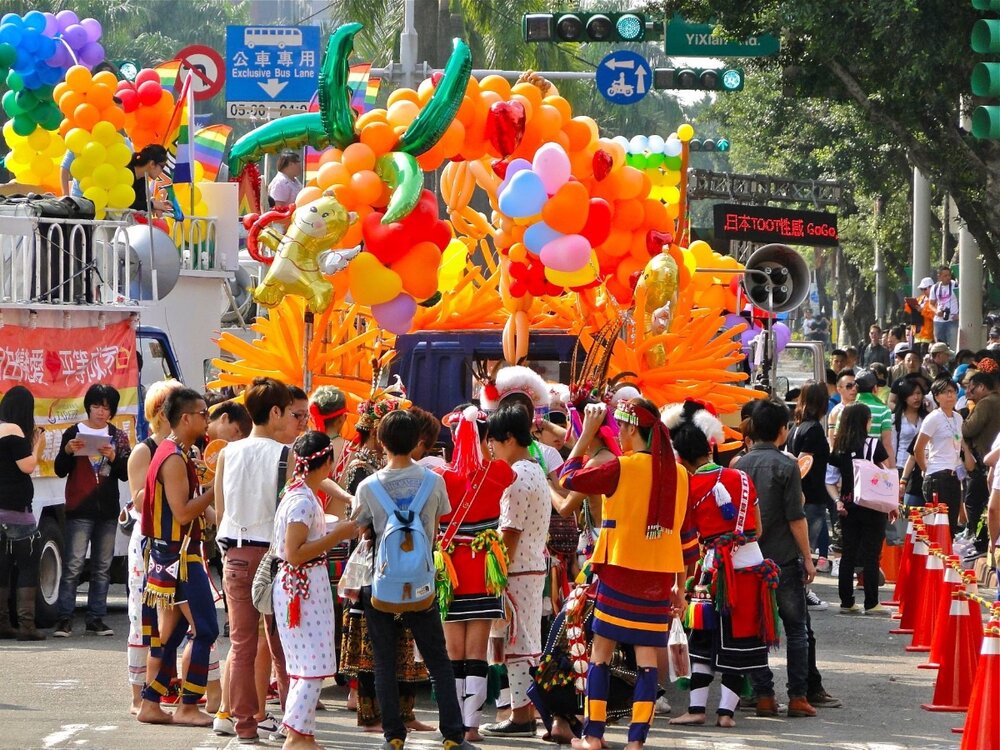 During these dark days almost the only place for gay guys to meet up was in Peace Park not far from what was then the Hilton Hotel (now the Caesar Park). Some members will have read the book ‘Crystal Boys’ about gay life in the Park at that time. After Chiang’s son lifted martial law and introduced democracy, the island quickly took off economically. Along with greater freedom, gay Taiwan slowly started to emerge. One of the original gay bars Club Funky near the Sheraton Hotel is still going strong. For the gay tourist, it is just one of a host of venues that now make Taipei one of Asia’s most interesting cities for gay tourists. Getting there is easy as its two main airlines China Airlines and EVA Airlines fly from several US gateways with relatively easy connections to the rest of Asia. Whatever your final destination, a 2- or 3-day stopover in gay Taipei will be well worth your while. Not only are Taiwanese guys amongst the most attractive in Asia, but they are also warm, polite, and welcoming.

Hotels and Getting Around in Gay Taipei 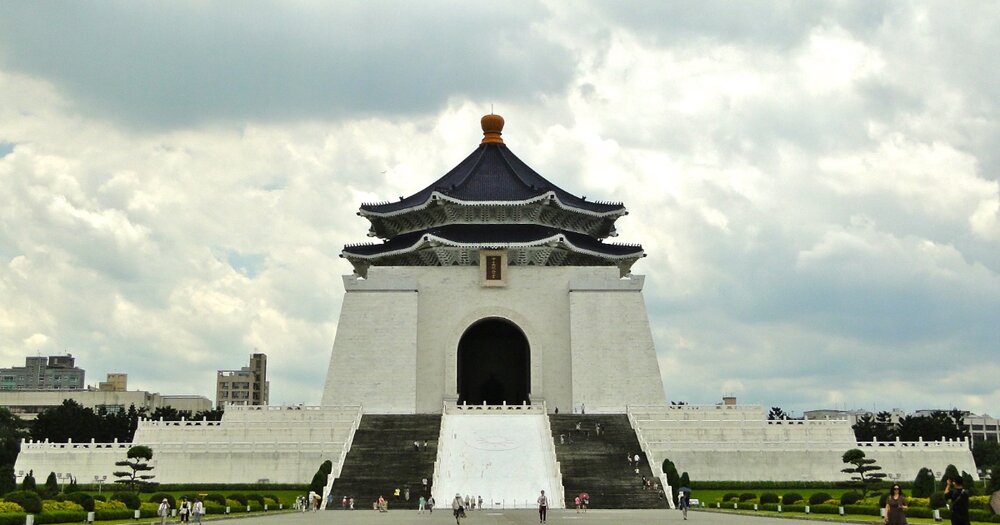 From Taoyuan international airport, taxis are plentiful and will get you to your hotel for around US$35. Cheaper options are the regular buses to the city’s Main Station and the domestic in-town airport. The fastest route is by subway to the Main Station where you can link to all parts of the city. Taipei has a huge number of hotels to fit all budgets. One of particular interest for some gay travelers is the Gs Hotel in the Songshan District. Nudity here is quite common since many of the showers are common areas. Don’t worry if the hotel you choose is a little out of the center. The city’s public transport is extensive and cheap. It’s unlikely you’ll pay more than US$1.35 for a long trip. Taxis are plentiful and trips within the central area should not cost more than around $5. Start your gay Taipei exploration at The Red House, the center of many gay bars, restaurants, and boutiques which surround two of its sides. Take the Red Line subway to Ximen Station one stop after the Main Station. Take Exit 1, cross the road and the Red House is just across the road to your left. Packed at the weekends with some great eye candy, it will still be busy during weekdays – as long as it is not during a typhoon! 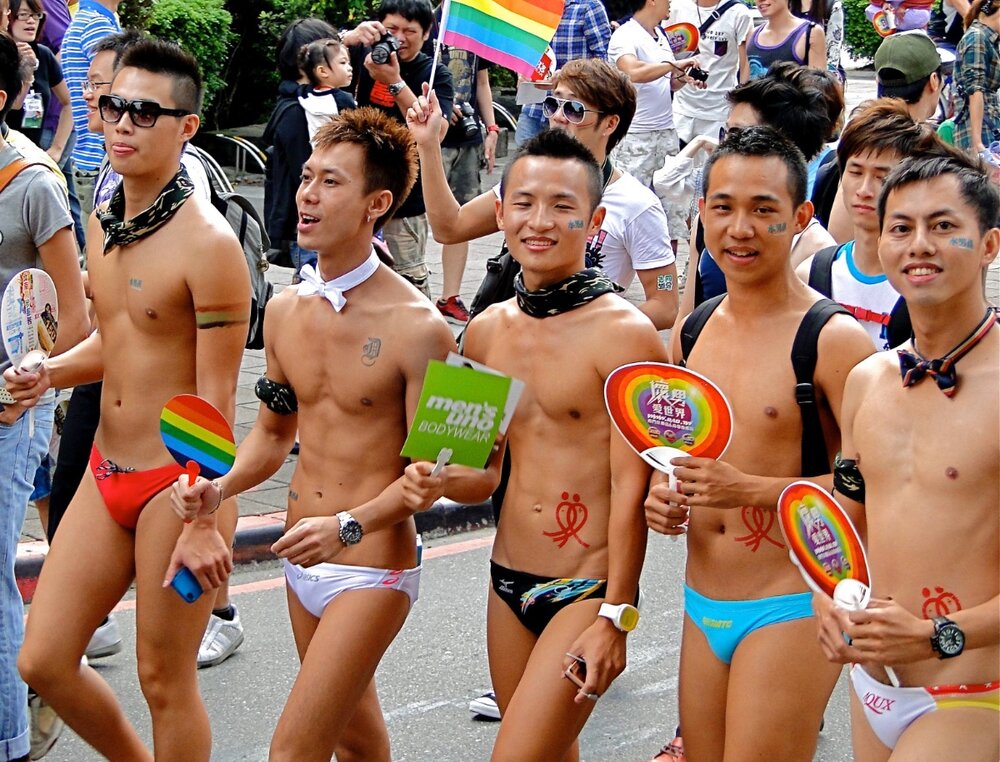 Only a 10-minute walk away you will find Commander D (not to be confused with Commander which is at the Red House upper level). Commander D is a small basement leather bar where almost everything happens. Each night may have a different theme and nudity among the patrons is not unusual. There is sometimes a show on the small stage. There is also a small darkroom.

Hans Mens Sauna very close to the Red House is a much older sauna with generally an older clientele, although occasionally you will find students here. The ‘in’ sauna now is the relatively new Soi13in in the Zhongshan District about a 10-minute walk from Shuanglian station on the Red Line. It is usually packed with handsome slim younger guys. For those interested in seeing lots of equally handsome naked young Taiwanese, you should head for the hot springs to the west of the city. These were developed by the Japanese during their occupation of the island in the first half of the 20th century. There are more than a dozen here with separate bathing areas for men and women. The one attended by most gay guys is Huang Zsu (see the name card). You will never find it on your own, so unless you have a nice Taipei friend, take the Red Line subway to Shipai station. As you exit, you will see a taxi rank on your right. Get in and show the driver the name card. He will take you about 4 kms up the hill and then down to the parking area just short of Huang Zsu. Walk down the hill for about 80 meters and it is on your left. Entrance is NT$250 (about US$8) but you will also need to make sure you have 2xNT$10 coins for the locker. 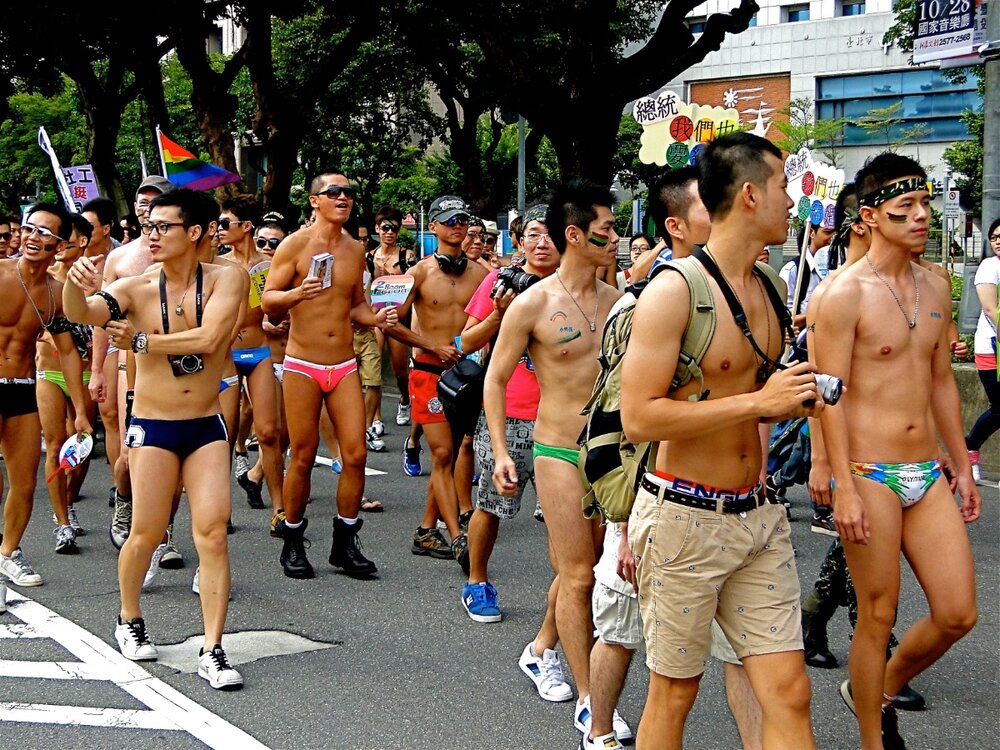 Like all hot springs Huang Zsu has 5 pools ranging from extremely hot to very cool. It also has a steam room and a small sauna. Be careful because it is not totally gay. Sometimes you will find fathers with their young kids. But there is sometimes a bit of touching in the steam room. Best just to ile and soak in the waters, chat up some of the other bathers and perhaps set up a meeting for later in the evening or another day.

One point to note is there are far fewer money boys in Taipei than some other countries. Gay massage is popular although extras need to be negotiated and may not always be available. 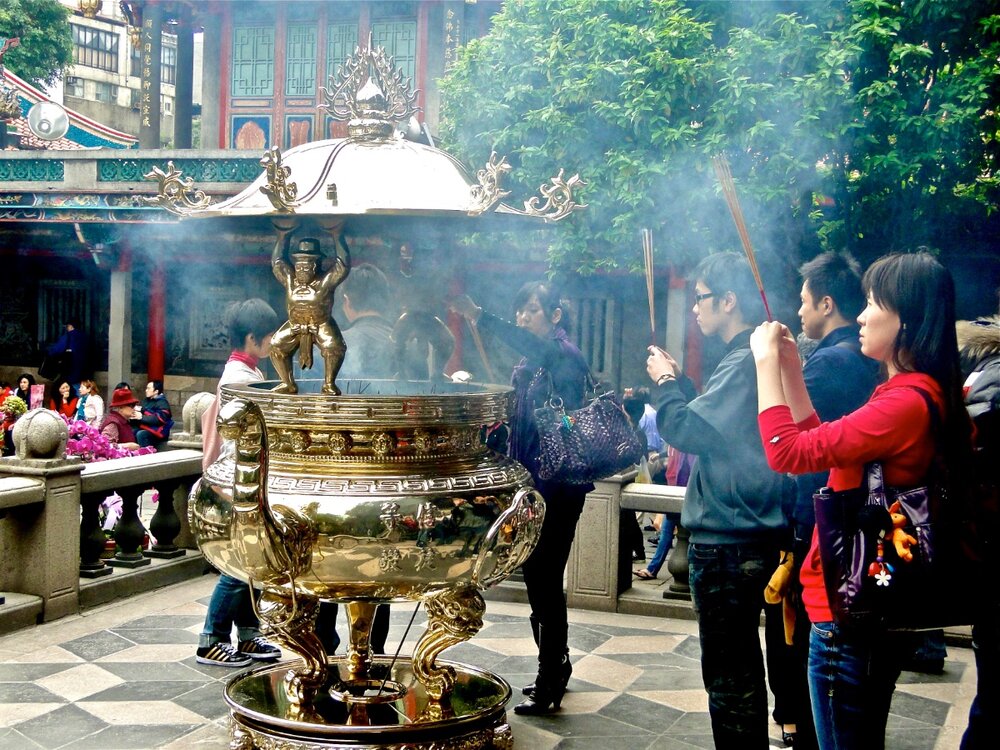 For sightseeing, one must is the National Palace Museum situated just outside the city. When Chiang Kai Shek was fighting Mao’s forces, he crated up most of the art treasures of China so they would not fall into the hands of the communists. When he fled to Taiwan, the art treasures came with him. This is one of the great Museums of the world and worth spending half a day there. One of the most popular exhibits is the small piece of white and green jade on the cover of the Museum catalogue. This was carved into the shape of a Chinese cabbage. Look closely and you will see two insects on the top. 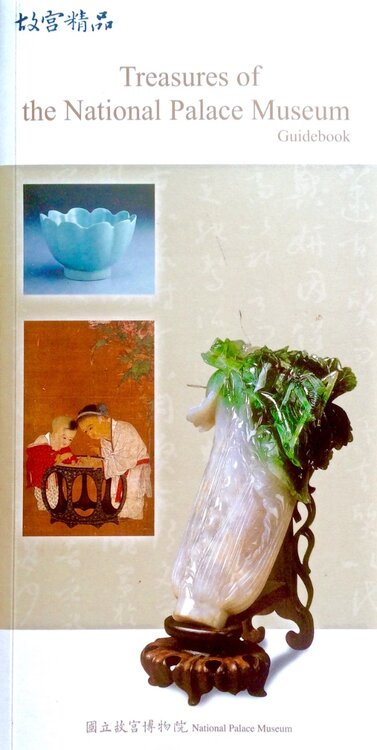 For five years from 2004, Taipei 101 was the tallest building in the world. On a clear day the view from the observation decks is stunning. In addition to a number of major temples, another sight worth a visit is the Chiang Kai Shek Memorial Park. The large white building at one end houses Chiang’s Memorial, notable for the changing of the tall handsome guards every hour. At the other end of the park are two Chinese looking buildings. One houses the National Concert Hall and the other the National Opera House.

If you time your visit for the last Saturday in October, one sight you absolutely must not miss is the annual Taipei Gay Pride Parade. Started in 2003 by a group of gay citizens, the Parade has mushroomed into the largest in Asia. In 2019 an estimated 200,000 took part, most from Taiwan but also many from places as far afield as Australia, Singapore and Tokyo. The Parade is a day filled with fun. When the weather is good (as it usually is) there will always be a group of young marchers showing off their latest Speedo and Aqux purchases – and nothing else! The three days of the weekend have circuit parties which are always packed out. Oh, and don’t forget to sample traditional Taiwanese cuisine, one of the joys of visiting the island.

Check out our Gay Taiwan and Gay China Forums